Akiko Hoshino
Haru Isobe (磯部ハル, Isobe Haru) is a character from Ju-on: White Ghost, portrayed by Akiko Hoshino and Chikako Isomura. Haru was a mentally-disordered elderly woman who was also Mirai and Atsushi's grandmother. Along with the Isobe family, Haru was murdered by Atsushi and became an onryō, as their house became inhabited by an atemporal grudge curse.

Haru arrived with her family to their newest house. She was emotionally attached to a basketball she often carried and got upset when her granddaughter took it away from her. Also, she seemed to be obsessed with keeping a more younger appearance, putting on wigs and make-up. After he was possessed by an unknown force, Atsushi murdered his whole family; Haru was strangled to death with a rope.

Still carrying her basketball, Haru became an onryō and started haunting her house in a time loop. She was able to lurk Atsushi in the past, attracting her grandson to the mirror that eventually took over him. A victim of her curse, Fumiya had stepped inside the Isobe house to make a Christmas delivery and was haunted by Haru's ghost, who persuaded him into murdering his girlfriend Chiho.

Haru often put on wigs to make herself become more attractive to Atsushi. Moments before her death, she was putting on make-up and wore a traditional kimono. Her ghost is white, with pitch black eyes and hair.

Haru comforts her grandmother after Atsushi rejects her. 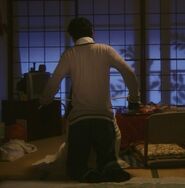 Haru is murdered by Atsushi.

From the future, Haru's wraith lurks her grandson.

Akiko Hashino as Haru with the White Ghost/Black Ghost cast in 2009.

Retrieved from "https://ju-on-the-grudge.fandom.com/wiki/Haru_Isobe?oldid=11504"
Community content is available under CC-BY-SA unless otherwise noted.