Ju-on: The Curse (呪怨 Juon), also known as Ju-on, is a 2000 Japanese direct-to-video film written and directed by Takashi Shimizu. Is the first installment in the Ju-on film franchise, following the two short films Katasumi and 4444444444. Divided in six parts, the film introduces the grudge curse gathered in a house after an insane man murdered his wife in anger, following his discover of her secret feelings for another man. After noticing one of his students has missed many of his classes, this man, Professor Kobayashi, goes in search of the boy and has a horrifying excuse for his absence.

A teacher named Shunsuke Kobayashi returns home to his apartment one evening and talks to his pregnant wife Manami. They discuss a student of Kobayashi's named Toshio Saeki who hasn't been to school recently, and Kobayashi is getting concerned. He looks at his file, reading that his father, Takeo, is an illustrating artist, and his mother is Kayako Saeki, whom he remembers from his college days. Manami remembers her as being very strange. The next morning, Kobayashi visits Toshio's house and finds him around the side of the house with his arms through the bars of the bathroom window.

He refuses to talk to Kobayashi. After Kobayashi asks where his mother is, Toshio falls back into the bath tub. Kobayashi enters the house and brings Toshio into the living room to talk to him. After a very brief conversation in which Toshio tells Kobayashi that his parents were "outside", Kobayashi hears a strange noise and looks out the window, not realizing that Toshio is making a cat-like noise behind his back. There is then a close-up of the house showing Kobayashi looking out from the window as a ghostly woman emerges from the second-floor window.

An unknown amount of time has passed, and the house has new occupants. The family living there are the Murakami. Daughter Kanna is studying with Yuki, her tutor, when mother Noriko tells the girls that she will be out for a while. It is revealed that there is a cat or cats that prowl the area around their home, and Yuki is afraid of cats. She begins hearing strange noises, although Kanna doesn't notice. Kanna remembers she is late for feeding the school rabbits and quickly leaves the house, but not before embarrassing her brother Tsuyoshi about his new girlfriend Mizuho. Yuki is now left alone in Kanna's room. The noise Yuki hears is more pronounced, and thus she tries to distract herself by playing some music on her headphones, but her player skips. The noise seems to be coming from the attic, and she packs up her things and tries to leave. She opens the door and the hallway is now pitch-black.

She calls out for Tsuyoshi, but gets no reply. Suddenly a cat appears in the hallway, and in the throes of fear she stumbles back into Kanna's room and inside the closet. The noise is louder than ever, and she decides to investigate it by looking up through the opening into the attic. She pulls herself up to the attic and looks around, she can't see very well in the darkness and tries to pull out her lighter. As she is searching for it, a silhouette of a woman comes very close to her, only a few inches away from her face. Out of fright she lights the lighter to see the woman's (Kayako) face and shows a scene of her getting pulled up to the attic. An oblivious Tsuyoshi is then seen leaving the house.

Mizuho Tamura is at school waiting for Tsuyoshi, as she sees his bicycle and backpack. Nearby she finds a cell phone. After she waits for a while, a teacher comes out and asks her to leave the school property as it is late. When asked if anyone else was in the school, the teacher says there isn't. She helps Mizuho in searching for Tsuyoshi, and tells her to wait in the teacher's room while she checks the school again and reports on Mizuho remaining at school, promising her she will be punished for it. Mizuho calls the Murakami house and is answered by Noriko who tells her that Tsuyoshi isn't at home. She turns on the lights, which blink and go out. The call has ended, and Mizuho turns around, sensing a presence. She sits down and plays with a lamp until it stops working. Mizuho goes under the desk and proceeds to fit the plug back into the outlet when she sees a couple of bare white legs run past. The phone on the desk begins to ring, and as she reaches for it from under the table, clamps onto the foot of that person.

The table starts to shake, and she screams until all that can be heard is the continuous ringing of the phone. Mizuho climbs out from under the table and looks at the caller's number, which is 444444444444. She believes this to be an opportune time to leave but decides to wait for the teacher and she answers the phone (which is still ringing). The caller greets with a meow, and Mizuho feels something grab her arm. When she looks down, she sees Toshio, who meows once more as the camera zooms into his mouth.

At a coroner's office, two detectives, Yoshikawa and Kamio, come in and are investigating a mysterious body that was found dismembered at a school, with dead rabbits and a jaw nearby. The body to whom the jaw belonged was not found, and it certainly did not belong to the present body. A cadet comes in telling that a witness had seen two girls, Hisayo Yoshida and Kanna Murakami, come in to feed the rabbits. Outside, Yoshikawa asks Kamio if he thinks a person can live without a jaw when it was lost in that fashion.

Back at the Murakami house, Noriko comes back from shopping and checks the mail, some of which is addressed to 'Takeo Saeki'. She receives a call from Mizuho who asks if Tsuyoshi is still at home. Noriko looks upstairs for him but finds no one there. While she tells Mizuho that he has already gone to school, a figure walks through the stairs and informs her that she will check to see who it is. As she adjusts her purse, she notices a trail of blood following the person who just came in. Whoever it looks completely disheveled and beaten-up and is walking up the stairs. Noriko follows the person, repeating her daughter's name before asking her what happened. The person slowly turns around and as Noriko screams, we see Kanna without her lower jaw.

We come back to Kobayashi at the Saeki house, years before. It is now late afternoon. Kobayashi is getting impatient while waiting for Toshio's parents and calls Manami, but she says there is someone at the door and hangs up. Kobayashi finds Toshio in his bedroom drawing strange pictures of cats and his parents. He leaves him there and walks into the hallway. A door opens into a bedroom, and Kobayashi enters the room. On a desk are many photos of the Saeki family with Kayako's face cut out of every one of them. Underneath them all he finds a journal, belonging to Kayako. He reads it, finding out that she was obsessed with him. He drops the book and walks away, but he hears flies buzzing in the closet. He ignites his lighter, looking into the attic. He sees Kayako's bloody body in a trash bag. In shock, he bursts out of the room, takes Toshio and heads downstairs to leave. It is now night outside. Before he exits with Toshio, his cell phone rings. It is Takeo Saeki, who is calling from a phonebooth near Kobayashi's apartment to inform him that his baby has been born, suggesting that he has stolen the baby from Manami's body, killing her.

Kobayashi drops to the floor in shock. Toshio picks up the phone and says he understands about "it". Kobayashi begins to realize that Toshio is not what he seems. A bedroom door opens upstairs and a sloshy noise is heard. Kobayashi looks to the staircase and sees a bloody Kayako crawling down the stairs as Toshio begins to meow. Kobayashi backs up against the door, ignoring the meowing Toshio. The door opens by itself, and Kayako looks down on Kobayashi from above. As she comes closer to him, Kobayashi has a heart attack and dies. Toshio continues to meow into the phone. Takeo has Kobayashi's dead baby inside a sack, hitting it against poles and pipes in the middle of a street near the phonebooth. He drops to the ground near a pile of trash bags. Something inside the one of the trashbag follows him out into the middle of the road, and Takeo is killed by Kayako's ghost.

The story flash-forwards back at the Murakami family storyline. Kyoko Suzuki is asked by her brother Tatsuya to come and check a house that his realty firm has recently bought cheap. Apparently all of the Murakami, the family who used to live there, had been murdered or disappeared, except for the father who is in the hospital. Kyoko has a mild psychic ability, as she is naturally sensitive to the supernatural world. Upon seeing the house, she feels some unnatural vibes. When entering the house, she sees something moving through a little window in an upper bedroom. Kyoko checks the mail (everything had been left where it was after the Murakami) to see the name Takeo Saeki. As Tatsuya is bustling downstairs, she feels a presence upstairs and slowly ascends, when she sees Kayako walking to her room. Kayako slowly bends down until she and Kyoko can see each other's face. She follows Kayako into her room, with Tatsuya tagging along.

In that room, Kyoko asks her brother to bring a bottle of Sake. She leaves the letters on the table as she hears a noise in the attic. When Tatsuya brings her a bottle of sake, she takes a gulp and splutters it out of the window. She tells him to leave the sake in this room for a while and to make potential buyers of the house drink it. She states that sake is sensitive to the spirits, and people who taste a difference should not be sold the house. She quickly flees, leaving her brother to take a gulp. He does not spit it out and goes about his duties. Sometime later, Tatsuya tells her that he sold the house without her knowing. He also asks her to check out his son later. Kyoko decides to see the house once more, now owned by the Kitada couple. When she sees Yoshimi Kitada (the wife) looking through the front window in a white dress and eventually turning to face her, fear overtakes her as she realizes this woman is possessed by Kayako. 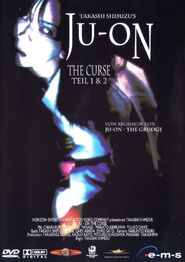 German DVD edition featuring The Curse and The Curse 2. 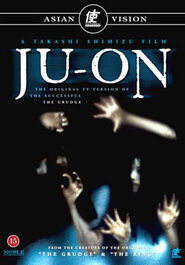 US DVD version.
Add a photo to this gallery
Retrieved from "https://ju-on-the-grudge.fandom.com/wiki/Ju-on:_The_Curse?oldid=11615"
Community content is available under CC-BY-SA unless otherwise noted.