Kayako Saeki (佐伯伽椰子 Saeki Kayako), née Kawamata (川又 Kawamata) born April 8, 1966 in Tokyo, Japan. She is the main antagonist appearing in the Ju-On franchise, having been portrayed most prominently by actress Takako Fuji. Director Takashi Shimizu created and originally voiced her death rattle himself. Actress Anna Moon plays the character for the Tales from the Grudge short segments, and Aiko Horiuchi replaces Fuji in The Grudge 3, the third installment of the western film series. Misaki Saisho portrays Kayako in the seventh Japanese installment The Beginning of the End. The character is also featured in the video game Ju-on: The Grudge. Kayako, alongside her ghost son Toshio, have become a icon of Japanese horror, as well as the horror genre in general.

Although her background is significantly different between them, in all versions Kayako is an onryō - the furious, spiteful spirit of a Japanese housewife who was brutally murdered by her husband, Takeo, after his discovery of her secret feelings towards another man. This insane act gathered a grudge curse at the murder setting, their house, that condemns anyone who steps inside to succumb under Kayako's spreading anger.

I'm always behind you. Remember that.

As revealed in the official novel written by Kei Ohishi, both of Kayako's parents were present albeit highly neglectful, causing Kayako to often feel depressed and lonely. She spent most of her free time with her cat Kuro and was highly antisocial. Kayako attended university and was seen as "creepy" by her classmates. Extremely shy, she secretly fell in love with a fellow academic, Kobayashi. Kayako became highly jealous of his girlfriend Manami and even tried to curse her, failing and eventually giving up. After the accidental deaths of her parents which did not seem to faze her, Kayako married Takeo Saeki, the only person who understood and cared for her, and together, they had a son named Toshio. As Kobayashi became a teacher and eventually Toshio's school teacher, Kayako had her dormant feelings rekindled.

Kayako continued to greet him always when picking her son at school, even though timidly. One night, while flipping through the pages of her diary, Takeo read about her secret feelings towards Kobayashi and in a jealous fit of rage, Takeo snapped her neck to a 90-degree angle, stabbed her to death and killed Toshio's pet cat Mar as well. Kayako's bloody corpse was wrapped in plastic and hidden in the attic, and Takeo left to continue his killing spree.

Her body was later found by Kobayashi himself when he visited the Saeki residence following Toshio's frequent absence from school. Kobayashi heard an exchange between Kayako and Toshio (supposedly still alive), in which Kayako assured Toshio she would always be "behind him". Kobayashi entered the room and found the boy alone and drawing. Through Kayako's diary, Kobayashi also discovered she was deeply in love and perhaps obsessed with him. Kobayashi then found her corpse placed in the attic.

Disturbed at the house's lobby, Kobayashi witnessed as Kayako's roaring bloody dead body crawled down towards him, and attempted to leave the place, only to be caught by the ghost, as Kayako's head surprised him in the open door, calling for his name. Takeo also found his fate under the curse himself created when Kayako surprised him from inside a plastic trash bag and killed him on the asphalt.

As the Saeki residence was now home for the curse, Kayako's ghost continued to punish anyone that entered the place and became able to affect other places and people through them. She demonstrated affection towards a young boy, Nobuyuki, and saved him for last after killing his whole family. In this course, Nobuyuki's aunt Kyoko was possessed by the ghost. Nobuyuki, disturbed and tired, was pursued and cornered by several manifestations of the ghost while at school until he was taken. Kayako's ghost possessed Yoshimi, killed her husband Hiroshi and later manifested to real estate agent Tatsuya, who sold the house to the Kitada couple. The ghost, at some point, pursued a social worker named Rika and caused her to be murdered by the same way she was, through Takeo's hands.

Kayako finally found her chance to live once again, after an actress, Kyoko, stepped inside the house to shoot a horror-themed television show. Kyoko was pregnant and the ghosts directly caused her an abortion, assuming the baby's place afterward, as Kyoko was gradually lurked and haunted by them. Kayako was then reborn from Kyoko and was able to make one last victim in her ghostly form, Kyoko's friend Keisuke, before Kyoko woke up and, seemingly influenced by the curse, cherished "her" crying baby.

Sometime later, a still possessed Kyoko was seen walking on a bridge with a grown-up Kayako, carrying her diary and with her face hidden under her black hair. The little girl suddenly killed her mother by pushing her down the staircase. Kyoko, however, smiled at Kayako and attempted to embrace her before dying. Kayako only stared at her until she died, and walked away as Kyoko's dead body attracted the attention of some passersby.

The Beginning of the End

Toshio is my child, only. My child.

In the 2014 reboot, Kayako is portrayed as a mildly mentally disordered housewife married to Takeo Saeki, a businessman. The couple moved to the "house on the hill", both unaware that a boy was murdered there many years before. Feeling lonely, Kayako decided to have the baby she had always craved and decided to have one even under Takeo's constant absence but keeping her desire in her journal. When sleeping Kayako was visited by a ghostly boy who called her "mother" and entered her body. Kayako later found herself to be pregnant as she always wanted and promised this would be a secret between her and her son, which Takeo should never discover. Toshio, however, grew up distant from Takeo which started to upset him. One day, Kayako was asked by her angered husband who was Toshio's father, to which she only mocked him by answering that the boy was only hers. Takeo then snapped her neck, killing Toshio and his cat afterward.

The murders eventually gathered a grudge curse in the Saeki house. Mr. Konishi, Toshio's teacher, visited them after Toshio's unexplained absence from school. He met Kayako, who behaved strangely and repetitively told him Toshio was "resting". After Konishi was taken by the curse, the substitute teacher Yui noticed Toshio's absence and visited the Saeki house as well. Kayako invited her in and Yui asked for Toshio's whereabouts. Kayako only told her "his father took him" and that he would be back soon. Yui went upstairs looking for the boy until a rattling Kayako scared her away from the house while filling her journal's pages with spirals. Yui told the school's director that something was "not right with that woman". One night, Kayako manifested to Yui and left the journal to her. At home, the ghost possessed Yui, who was later found by her boyfriend Naoto. Naoto noticed the journal and throughout its pages discovered Kayako's strong desire to be a mother. Worried about Yui, Naoto started investigating the Saeki family's past and uncovered the mystery between the two Toshios, until the ghosts of the mother and son appeared. Kayako's ghost broke his neck, with Yui finding his body afterward. Yui returned to the house and found several videos of Kayako's life with Takeo and Toshio, and had a vision of her revelation and murder. When Yui found what seemed to be Kayako's corpse up in the dark attic, the ghost then moved and pursued her downstairs. 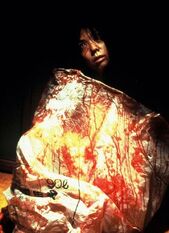 Pictured in the police's files.

The ghost crawls down for her former love, Kobayashi.

Kyoko is haunted at the house.

The ghost reveals Rika's fate through a vision (Click for animation).

The ghost comes to Megumi.

Chiharu is haunted and disturbed.

The ghost turns to Kyoko Harase.

As the ghost is portrayed in the Ju-on: The Grudge game.

Misaki Saicho as the ghost at Beginning of the End press release.

Kayako's ghost in her human form with her journal.

The ghost in the attic.

Haunting in a Korean promotional clip for Beginning of the End's release.

I know something about Peter.

Kayako lived in a rural, quiet Japanese village with her mother and sister. Mrs. Kawamata was an Itako, an exorcist of the Japanese culture, and deposited the demons or evil spirits from others inside Kayako. Because of this, Kayako wrote several entries in her diary in an unknown language, apart from registering about her own life.

Kayako fell in love for an American professor, Peter Kirk, and followed him wherever he went with his friends or his girlfriend. Kayako, somehow, obtained Kirk's nail slivers and a picture of his girlfriend and him with herself in the background. She kept it all in her journal until Takeo discovered it and in a fit of rage, broke her neck with Toshio witnessing everything. Kayako was still alive and saw when Toshio was being murdered by Takeo in the bathroom. With her and his son's corpses hidden, Takeo then hanged himself in the boy's bedroom. Her body was later found by Kirk himself, who had followed her numerous letters to the address listed in the envelopes. Disturbed and feeling guilty, he committed suicide the morning after.

With the grudge curse born, Kayako made several people that entered the house her victims. Later, she showed Karen Davis, a girl who had discovered about her past what caused her death and anger through a vision. Karen, after she set the house on fire in order to stop the curse, had one last vision, of the Saeki family as if they were alive and happy after all, only to be surprised by Kayako while in the hospital, realizing that her grudge would never stop. Karen, however, kept her belief that she could detain it and resisted, until she was caught by Kayako at last.

The curse also affected Karen's sister Aubrey and her mother (deleted scene), and, after Aubrey asked what it really wanted, Kayako answered by causing her to be murdered exactly like she was, through Takeo's bare hands. Through Allison, an American girl that entered her house, Kayako and Toshio managed to reach an American apartment building in Chicago. With the curse affecting the whole place, only one survivor was left, a young boy named Jake. Jake resisted longer to the curse and Kayako finally killed him by brutally breaking every single one of his bones.

As Kayako kept making new victims in the building, her sister Naoko later arrived, planning to stop her death cycle, through a ritual that she learns from their mother. Somehow, Naoko obtained the diary and a sample of Kayako's blood, needed for the ceremony. However, Max, another one of the aforementioned building's residents, became possessed by Takeo, and interrupted the ritual. Rose, Max's youngest sister, drank Kayako's blood as instructed by Naoko and Kayako's spirit seemingly vanished.

While hugging Rose and promising her everything would be fine, her oldest sister Lisa was unaware that she was hugging a roaring Kayako as well, indicating that her spirit became merged to Rose's body after all. Thus indicating that both of them, or at least Lisa is still under the curse, or that the ritual, did not work as planned after all.

Kayako as a child with her mother.

Kayako's corpse as found by Peter.

The ghost first manifests to Karen.

Kayako's ghost crawls down to Karen. 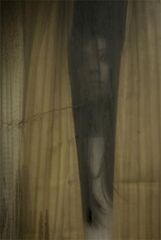 The ghost comes for Eason.

Kayako comes to her mother.

Kayako's ghost manifests in her human form, as Aubrey dies.

Kayako's ghost comes to Lisa and Rose.
Add a photo to this gallery

The Shojo in Supernatural.

Kristen Wiig spoofs the ghost in a Saturday Night Live sketch.
Add a photo to this gallery

Retrieved from "https://ju-on-the-grudge.fandom.com/wiki/Kayako_Saeki?oldid=11611"
Community content is available under CC-BY-SA unless otherwise noted.