Kyoko Suzuki (鈴木響子 Suzuki Kyoko) is a character from Ju-on: The Curse and Ju-on: The Curse 2, portrayed by Yuko Daike. A sensitive, Kyoko was cursed after being invited by her real estate agent brother Tatsuya to examine the Saeki house, in order to put it on the market.

Kyoko was asked by her brother to visit a house he intended to sell, aware of the place's background of death. Kyoko told him she was surprised about his concerns, to which he replied that such superstition was because the house had to be sold to prevent an eventual loss of money. There, Kyoko was told about the deaths of the Murakami family, stating that only the father was left behind. Kyoko told him that more deaths had happened in the house. She found some "Saeki" mailings at the lobby, and followed a ghostly woman to the closet room, where Kyoko felt the house's occult evil nature.

Under this, she ordered a bottle of sake. After drinking and spitting it in disgust, Kyoko made Tatsuya promisse that he would offer the sake to the house's future owners, explaining him that sake reacts naturally to the presence of spirits, and a strange taste would indicated that a place is to dangerous for people to live in. Disturbed, Kyoko ran out of the house, leaving Tatsuya puzzled. Tatsuya later called her informing that he had sold the house and done as she instructed, but the sake caused no effects on the house's newest owners.

Busy, Tatsuya asked Kyoko to visit his son Nobuyuki who had assumed an unusua, strange behaviour. Kyoko visited the house once again and saw a strange woman at the window, staring at her. Kyoko contacted a friend, Satô, and asked him to search about an incident that happened "one or two years" before. In his research, she found about the Murakami family disappearances, a teacher that mysteriously died at his student's home, and a man named Takeo Saeki who brutally murdered a pregnant woman in the apartment now owned by Tatsuya. She sent the research to her brother and went to visist her nephew, Nobuyuki.

She found the boy semi uncounscious and was disturbed by the aparment as well. A worried neighbour came and asked Kyoko if everything was fine, as she heard a baby cry and a woman's scream. Kyoko only dismissed the woman, remarking that there was no baby there. Returning, she found Nobuyuki is state of shock and was surprised by a gruesome vision of Takeo, murdering Manami and staring at them.

Some time later, Kyoko was taken by Tatsuya to their parents' home. At that point, she had assumed a strange, eerie behaviour and aspect, standing in the dark. Nobuyuki, affected as well, looked for her all the time. Her mother Fumi assumed Kyoko was only sick and concluded she should be taken to the hospital, to which Kyoko's father Taiji declined as a doctor could not fix her situation.

Assembled, Taiji revealed to Tatsuya and Fumi that Kyoko saw ghosts because he did as a child, but he could never think she would be affected at such level. Fumi, however, stood hopeful on Kyoko's condition, only to be taken by the grudge curse through her. With Nobuyuki by her side, Kyoko started moving back and forth holding a baby doll as if cradling it, until Kayako's ghost completely consumed her. 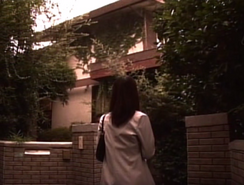 Kyoko arrives at the house. 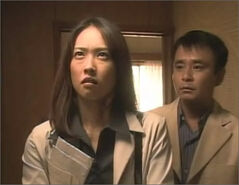 Kyoko with her brother Tatsuya in the house. 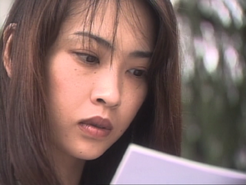 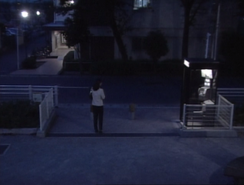 Kyoko senses something in the phone cab once occuped (and bloodied) by Takeo. 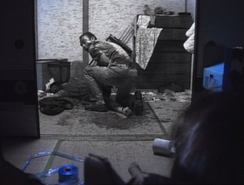 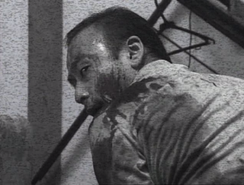 Takeo haunts Kyoko from her vision.
Add a photo to this gallery
Retrieved from "https://ju-on-the-grudge.fandom.com/wiki/Kyoko_Suzuki?oldid=10136"
Community content is available under CC-BY-SA unless otherwise noted.