Start a Wiki
The Saeki House is a common, unassuming, two-story fictional Japanese house located in Tokyo, and a main setting of both Ju-on and The Grudge franchises. In Ju-on, the house first appeared in Ju-on: The Curse and is last seen in Ju-on: The Beginning of the End, after being absent from White Ghost and Black Ghost.

The house is located at the Nerima district in Tokyo, Japan, and was home for a seemingly normal family, the Saeki’s, who consisted of Takeo Saeki, his wife Kayako Saeki and their only child Toshio Saeki, who owned the family cat Mar

At some point, the family's harmony was destroyed after Takeo found out Kayako's secret feelings towards another man, their son's teacher Shunsuke Kobayashi. Going insane, Takeo murdered Kayako, Toshio and Mar the cat, before killing Kobayashi's pregnant wife Manami Kobayashi. With his murders Takeo unintentionally created a grudge curse that, according to the myth, takes over a place (their house in this case) following a moment of intense anger.

After the murders, this house was first bought by the Murakami family, all of them being taken, possessed or killed by the curse afterwards. The following residents were the Kitada family, with Yoshimi Kitada the wife being possessed by Kayako's spirit, killing her husband Hiroshi Kitada and a real state agent, Tatsuya Suzuki. The curse proves itself able to affect people not necessarily stepping inside the house, so Tasuya's family, the Suzukis, also succumb to it through interacting with other cursed individuals, inferring that the curse can spread like a virus.

At some point after, Yuji Toyama had attempted to burn the house down after he had investigated the prior deaths in the house and his colleagues were claimed by the curse, but fails when he is attacked by the ghosts and escapes the house, inadvertently getting Detective Nakagawa and Detective Igarashi killed when they followed him to the house. He later dies off-screen.

Sometime later, the house is purchased by the Tokunaga family. Kazumi Tokunaga is the first victim, being haunted by the ghosts and left in a catatonic state in her bed. Katsuya Tokunaga tends to her but is attacked by Toshio’s ghost. He is then possessed by Takeo’s ghost and then kills Kazumi, recreating his murder of Kayako. He is then visited by his sister Hitomi Tokunaga, and in the middle of mumbling about a woman having an affair, kicks her out. Hitomi is then claimed by the curse in her apartment.

Sachie Tokunaga is the only surviving member of the family, who is left speechless and dependent. She is then put under the care of Rika Nishina, a live-in Nurse. As she’s putting her to bed, Sachie is finally claimed by Kayako’s ghost, leaving Rika shocked. Rika would be haunted by the curse afterwards, seeing Kayako and Toshio at the foot of her bed, Kayako’s hand popping out of her head in the shower, and having nightmares about Mar. She is forced to return to the house when her friend Mariko visits it. Finding her murdered by Kayako, she is cornered and eventually killed by Takeo’s ghost, who recreates his murder with her.

A while later, the house is visited by four schoolgirls named Izumi Toyama, Saori, Chiaki and Ayano. Izumi is the sole survivor after the girls are attacked and killed off-screen. The ordeal left Izumi catatonic and traumatized, until she was eventually claimed by Kayako.

A TV crew entered the house to shoot an episode of a popular TV variety show called Heart-Stopping Backgrounds, which featured an actress Kyoko Harase, who was pregnant by the time she went in. Kayako's spirit (and perhaps Toshio's as well) found its chance to live again through Kyoko's pregnancy, killing her unborn child and assuming his place. All of the crew members succumbed to the curse, and later Kyoko's husband Massashi, untill Kayako was reborn from Kyoko.

It is unclear if Kayako's rebirth ended the grudge curse.

At some point, the house was bought by Yamada family. After buying the house, the whole family was cursed and later killed by Kayako and Toshio.

The house is located at the Suginami special ward in Tokyo. After the Saeki murders, with the father hanging himself in Toshio's bedroom, Peter Kirk, the pivot of Kayako's murder, visited the house following her letters but is not seen being haunted or disturbed by the curse in any way; he, however, commits suicide the morning after.

A group of detectives entered the house to investigate the Saeki murders and were taken one by one. The first family to own the house was the Williams family, an American family living in Japan. The whole family ended up being killed by the curse, as well as their first caretaker hired, and the previous caretaker Fiona Landers, who unintentionally took the curse back with her to Pennsylvania.

Detective Nakagawa sent to investigate their deaths succumbed while entering the house in order to burn it down. The caretaker's substitute, Karen Davis then took it upon herself to set the house on fire attempting to break the curse, but fails, as she is taken as well. The curse grew stronger from the fire, and the flared house remained and was visited by Aubrey Davis, Karen’s sister, and a journalist named Eason (Though Aubrey was actually dragged inside), who believed the fire had somehow worsened the curse. Three schoolgirls also stepped into the place, 2 years after Aubrey’s encounters with the house. Allison Fleming is brought to the house as part of a mean prank by Vanessa Cassidy and Miyuki Nazawa, which goes horribly wrong when they actually see the ghosts on the premises. Allison survives long enough to unintentionally bring the curse to her home in Chicago, USA, affecting the whole place and its resident families, thus setting up the events of The Grudge 3.

The house used in the Ju-on film series.

Kobayashi at the house, with the Saeki plaque.

The house as seen in Video Side.

Kyoko's first sight of the house.

The house as it appears in The Beginning of the End.

After the demolition of the Saeki house

The house after the fire.

Aubrey about to confront the curse. 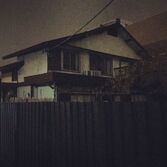 Saeki House.
Add a photo to this gallery

Retrieved from "https://ju-on-the-grudge.fandom.com/wiki/Saeki_House?oldid=12004"
Community content is available under CC-BY-SA unless otherwise noted.