The Grudge 3 is a 2009 American horror film and the third installment in The Grudge film series, written by Brad Keene and directed by Toby Wilkins, who previously directed the Tales from the Grudge short segments. Takashi Shimizu serves as an executive producer.

The plot continues from the events of The Grudge 2, where the curse reached a Chicago apartment complex. As the building decays and its inhabitants gradually succumb to its fury, the place welcomes its newest dweller, a Japanese young woman who plans to put an end to the grudge. The Grudge 3 was released on May 12, 2009 and stars Johanna Braddy and Shawnee Smith. In the US, it got a straight-to-video release but a theatrical release in foreign territories like Mexico, Bolivia, Ecuador, South Korea etc.

The film begins in a mental hospital, where Jake Kimble is in a cell. He complains to his doctor, Francine Sullivan that if she leaves him alone, then She (Kayako) will get him. Sullivan tells him that he is there for his own protection, and that he will be safe there. She apologises to him and leaves, telling him she will be back later. Jake sits quietly for several moments but is unnerved when the lights begin to flicker and he whispers "She's here". He then begins to hear Kayako's croaking sound and tries to get the security guards attention through the lone camera in his cell. He begins to bang on the door but is grabbed by pale hands and thrown around the room. Dr. Sullivan alerted by the guard runs to his cell and opens it only to find him dead with Kayako's handprints bruised into his arms.

Kayako's sister, Naoko Kawamata, is a young Japanese woman who hears of Jake's death through the newspaper and becomes worried. Naoko knows how to stop the grudge and travels to America, more specifically to Chicago where the last incident linked with Kayako occurred. She is introduced to the Chicago apartment by Max Morrison, the landlord, and immediately begins to feel her sister's presence. She meets Max's little sister, Rose, and she somehow knows that Rose is in touch with the dead and can communicate with Toshio, Naoko's nephew. She also meets Lisa and they quickly become friends, and they meet other residents of the apartment, including Gretchen, who is an artist. Lisa begins to grow frightened when she realizes her younger sister Rose is seeing a dead boy all around the apartment.

Naoko is observed throughout the apartment by Kayako, her sister. Later that day, Lisa encounters Toshio, who makes her jump. When asking him what he is doing in the apartment, Toshio vanishes leaving Lisa bewildered. A girl is killed when Toshio's hands pull her into her bathtub and drown her. At night, Gretchen is painting a beautiful picture of Rose and when she turns away she finds it almost shredded and in a pool of red paint that resembles blood. Whilst expecting the painting of Rose, it briefly changes to a portrait of Kayako and handprints begin to apear in the red paint and move towards Gretchen. Then another of Gretchen's paintings begins to change and morph into Kayako who crawls towards Gretchen and kills her by gouging her eyes out and ripping off her jaw, presumably because Gretchen's career reminds her of her husband, Takeo. Max discovers Gretchen's body and is horrified to see black blood/paint flowing from her eyes. Lisa, Max's sister, hears about the grudge from Naoko and realizes that the death of her sister and the deaths in the Chicago apartment - including the death of Jake Kimble - are connected, and to this end she meets Dr. Sullivan, who informs her of what she learns from Jake concerning a girl named Allison Fleming and a woman named Kayako Saeki, from Japan. Lisa recognizes the boy as the one Rose has been seeing, and to her horror Dr. Sullivan informs her that the Saeki family died long ago because Takeo Saeki killed Kayako and Toshio in a fit of anger and jealous rage. Dr. Sullivan also informs Lisa that Toshio, the boy Rose has been seeing, is dead, and plays a video of one of her interviews with Jake, who tells Dr. Sullivan that Kayako is sitting right in between them constantly and when Jake is about to describe Kayako's face as "looking as though she is dead," Lisa eventually returns to the apartment. Dr. Sullivan examines further evidence and then goes down the corridor out of her office because she sees Toshio on the monitor. Everything seems normal for a few brief seconds until Kayako appears in the hallway. Dr. Sullivan recognizes her from her pictures and interviews with Jake and exits via the other door in the corridor, only to have Kayako appear before her in the corridor she is now in. Dr. Sullivan screams for help and knocks repeatedly on the door, but meanwhile Kayako is catching up. Kayako litterally walks through the door opposite and Dr. Sullivan feels Kayako's fingers go through her hair and touch the side of her face as she screams for the cleaner to open the door, and then suddenly Kayako seizes Dr. Sullivan's head and snaps her neck, splattering blood against the window.

Later that evening, Lisa invites her boyfriend Andy out to supper, and there she discusses the Saeki murders and her theory that the vengeful ghosts are in her apartment. Andy dismisses her ideas initially, saying "you only make connections you want to see," and persuades Lisa to come to New York with him, but Lisa refuses. Andy returns Lisa to the apartment, and later when he leaves he sees the lights flickering and Toshio's legs run upstairs. He follows Toshio to a black hallway and sees Toshio run before him in the gloom. When Andy flicks on the light switch, Kayako jumps on him and grabs him violently as the door closes to the sound of her death rattle.

Later, Max shows signs of a mental change and becomes violent and aggressive. He viciously attacks his superior when he is fired, and later his superior is killed by Toshio Saeki in his broken-down car. Max kicks out his own sister Lisa after taking out his rage on her, and then he also pushes Rose aside and tells her to go to her room. When Max squats down before the door, ignoring Lisa thumping on it, he starts shivering uncontrollably as if something is possessing him. Lisa, frightened, goes to Naoko for help and Naoko realizes what has happened to Max. She dresses in a classic Japanese kimono and begins to perform an exorcism on the building using Rose as a witness, but halfway through Naoko tells Lisa that Rose has to drink Kayako's blood, which she somehow has obtained. Naoko begs Rose to drink it, claiming that "the bad will go away". Lisa refuses to have anything to do with this ritual, and begins to leave, only to find her path blocked by Max. Now it is revealed that Max has been possessed by the evil spirit of Takeo Saeki, and he is now out to repeat the same murder he performed on Kayako. He pursues Naoko into the hallway, and when Naoko attempts to reason with him, he breaks her leg, so she has to crawl just like her sister Kayako did. Naoko attempts to crawl away but Max seizes a utility knife, grabs Naoko by her long black hair, and thrusts the blade into her throat. Meanwhile, the murderous spirit of Kayako is back for the final showdown, and she pursues Lisa and Rose through the upper story of the apartment. Lisa and Rose run into the bathroom and find the corpse of her boyfriend Andy, but when she grasps it, Andy becomes Kayako and attempts to strangle her. Rose is thrown out of the bathroom and the door locks Lisa in. Lisa backs away, and Kayako crawls right up close to Lisa's face and utters her death rattle loudly. Just as Kayako is about to kill Lisa, Rose drinks Kayako's blood and Kayako's evil spirit vanishes. Just then, the evil spirit of Takeo is exorcised from Max, who, when reverted to normal, is horrified at what he has done. When he is sitting, immersed in remorse and guilt, in the apartment's corridor, noises come from the other end of the corridor. The source of the noises is revealed to be Naoko's spirit, stumbling on her broken leg while her throat gushes blood. Naoko's spirit now embodies the reborn Grudge caused by Max. She crawls up to Max and bites into his throat. Now Kayako's new curse is haunting the apartment in the wake of Naoko's demise.

The final scene is of police and doctors removing the bodies and Lisa telling Rose that everything will be alright. However, as she hugs her, the final image is that of Kayako hugging Lisa instead of Rose, revealing that Rose now carries the exorcised spirits that Kayako used to carry. 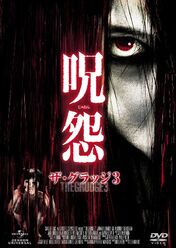 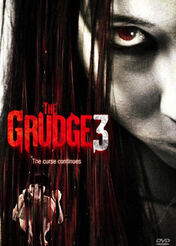 Retrieved from "https://ju-on-the-grudge.fandom.com/wiki/The_Grudge_3?oldid=12090"
Community content is available under CC-BY-SA unless otherwise noted.