Daiki Sawada (4444444444)
Ryôta Koyama (Ju-on: the Curse and Ju-on: the Curse 2)
Yuya Ozêki (Ju-on: the Grudge, Ju-on: the Grudge 2, The Grudge)
Unknown actor [1]
Ohga Tanaka (The Grudge 2)
Shimba Tsuchiya (The Grudge 3)
Shûsei Uto (Ju-on: White Ghost and Ju-on: Black Ghost)
Kai Kobayashi (Ju-on: The Beginning of the End and Ju-on: The Final Curse)
Rintaro Shibamoto (Sadako vs Kayako)
Garrett Masuda (Scary Movie 4)
Toshio Saeki (佐伯俊雄 Saeki Toshio) was born on July 27, 1987 in Tokyo, Japan. He is a fictional character from the Ju-on franchise. Toshio is an onryō, the spiteful ghost of a boy who lost his mother Kayako and his pet cat Mar under the murderous rage of his father Takeo. In the Ju-on films, Toshio is not murdered by his father and is implied that Kayako herself took him to the afterlife; In the Grudge films, he is murdered by Takeo as well, drowned to death by his father in the bathtub. Toshio follows the resented spirit of his mother on a spreading grudge curse that sets on anyone who steps inside their house. His ghost is trademarked by his menacing, yet innocent aspect with pitch-black, wide open eyes, pale skin, and the haunting meowing sounds he makes.

The character has been portrayed by several actors throughout the franchise; Daiki Sawada first portrayed Toshio in the short film 4444444444; Ryôta Koyama replaced him in the first two Ju-on films, The Curse and The Curse 2. Yūya Ozeki replaces him in Ju-on: The Grudge, Ju-on: The Grudge 2 and The Grudge; in The Grudge 2, Ohga Tanaka portrays; Shinba Tsuchiya plays Toshio in The Grudge 3; Shûsei Uto appears as the ghost in his cameos in White and Black Ghost; and finally, Kai Kobayashi portrays him in the 2014 reboot film, The Beginning of the End, and it's sequel, Ju-on: The Final. Rintaro Shibamoto portrays him in the crossover, Sadako vs Kayako.

Toshio shares a main role with his mother Kayako, and has become an icon of japanese horror and the general horror genre as well.

Are you really my mother?

Toshio is born to Takeo and Kayako Saeki, a Japanese couple residing in Nerima City, Tokyo on July 27, 1985 as seen in Ju-on: The Grudge. He had a teacher named Kobayashi in school, who happened to be an old flame of his mother, but who never really noticed Kayako. Takeo discovers a journal in which Kayako wrote intensely about her love for Kobayashi. Blind with rage, he obsessed over the mistaken idea that Kayako is cheating on him. He attacked Kayako when she came home and violently killed her. The Ju-on film series never actually makes it clear about what or who killed Toshio, even though Kobayashi already finds him meowing and able to communicate to his mother, suggesting that her spirit took him by herself. Her murder sets a curse upon the house, in which the ghosts of Kayako, Toshio and Takeo (who is killed back by Kayako's ghost soon after her murder) attack anyone who enter, re-enacting the murders and following the victims wherever they go.

Noticing his absence, Kobayashi went to the Saeki house and found a trail of blood, and Toshio acting lazy and covered in bruises. Toshio only told him his parents were "out" and later was heard talking to an unseen woman about his father, inside his room. Toshio complained that Mar was killed and told her his father had left for good. The woman promissed that she would stay with him forever, to whom Toshio asked back if she was really his mother. The voice remarked  to Toshio that she would always be behind him, and Kobayashi entered the room, finding Toshio alone and making several drawings of his cat. After the teacher discovered Kayako's corpse in the attic, he tried to run out of the house with Toshio, only to be surprised by her ghost, as Toshio only meowed. Rika found him with his cat inside the closet, and thought he was an actual boy until she was told by Detective Nakagawa that he had been murdered years before. While the curse followed Rika, an old man noticed Toshio and started playing with him. A passerby also was able to see him as well.

Kayako came back to life when the curse gripped Kyoko Harase's pregnancy. Kyoko's last vision before being possessed was Toshio repetitively calling her "okasa" ("mother") while in her childbed. This implies that Kayako and Toshio were reborn as one, but is not made clear.

In  the 2014 reboot, Toshio is actually the reincarnated self of a boy named Toshio Yamada, murdered by his own family through being confined and left to die in a closet during a heatwave. The  domestic violence that led to his death sets a curse over  on the Yamada's house, condemning anyone who stepped into it.

Toshio eventually came back to life as Toshio Saeki when the curse gripped Kayako's obsession to bear a child in Takeo's absence. This led the spirit to enter her body and she become pregnant.

In a picture of the Saeki family found by Kobayashi.

Kobayashi, unaware of the evil he indirectly caused.

Toshio stares at Keisuke from his footage. 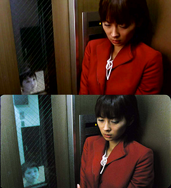 Toshio calls for his newest mother.

The ghost as portrayed in the Ju-on: The Grudge game.

Toshio manifests to a passerby.

Kai Kobaiashi promotes Beginning of the End as Toshio in Japan.

Kai Kobayashi as the ghost at The Beginning of the End press release.
Add a photo to this gallery

Kayako fell in love with an American professor named Peter Kirk. After discovering her inner feelings towards Peter, her husband Takeo killled her and subsequentely the boy by drowning him in the bathtub. All because he became obsessed with the idea that he was not his son. Takeo also drowned Toshio's black cat Mar, before hanging himself in the boy's bedroom. The spirits of the boy and the cat then merged up and formed a demonic entity that haunts anyone who enters the Saeki house, alongside Kayako's angry spirit. Following her letters' address, Peter went to the Saeki house and found Toshio acting lazy and covered in bruises in the middle of a complete mess. Peter later discovered Kayako's corpse and saw Takeo's hanged body. He runs out from the house frightened.

Karen eventually finds him trapped in the closet with his cat, and thought he was an actual boy, until she was told he had been murdered there three years before.

The curse then reached a new place, a Chicago apartment building, following a young girl who had stepped into the house and returned home, in an attempt to run away from the ghosts. There, Toshio posed once again as an ordinary boy that enjoyed playing with Rose's toys, such as the Mr. Potato Head she gave him. Her older sister Lisa also met him in his ghostly form, but also confused him with a human being. Not long after, his true nature was revealed. Toshio's ghost supposedly vanished after the banishing ritual performed in the building by his aunt, Naoko.

He does not appear in The Grudge (2020), only being indirectly mentioned and featured in a photograph.

The boy as he watches his mother's murder in two portrayals of Toshio, from The Grudge and The Grudge 2.

Peter Kirk unaware of the evil he indirectly caused. 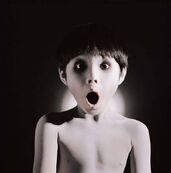 The ghost as the curse reaches a new place.

Mr. Praski is taken.
Add a photo to this gallery

Retrieved from "https://ju-on-the-grudge.fandom.com/wiki/Toshio_Saeki?oldid=12024"
Community content is available under CC-BY-SA unless otherwise noted.